Clay pigeon, shooter & everything in between

It’s time to upgrade our hearing protection guys, are you ready? Im going to talk a little bit about the different types of hearing protection that you might think about using when you’re out at the range doing your shooting training.

But before that, we need a foundation. I do this with pretty much everything I have in any project. There is a foundation of logic and then I build upon it.

If you notice in almost every video about clay shooting you’ll see that there’s a mix in what shooters are wearing to protect their ear from gun noise. Some of them are wearing earplugs and others using earmuffs.

It is extremly expensive. Tactical looking? yes. Can integrate comms into it? Yes. But more importantly back to the foundation, I like simple stuff. I just need some hearing protection and I really like it when it doesn’t use batteries.

Do You Need Electronic Hearing Protection?

For me, I’m not a Navy SEAL dropping into the compound in Pakistan, where I need those integrated comms. That
philosophy of use is different, I am a gear tester and that’s what I do.

While the electronic hearing protection is going to make it easier for a Range Officer or instructor, someone whose out on the range that actually teaching or for two people who working together to communicate.

I would caution you not to rely on the ear muffs for the best protection out at a range. You also get compromise when you put a stock up against your cheek sometimes where to open the seal on the ear muffs which can be very dangerous and even just wearing glasses.

Because most glasses with the ear pieces are not made to take into account the fact that you need a good seal 360 degrees around the ear and that can also compromise your safety.

Now first and foremost we have to remember that the reason you’re wearing hearing protection is to protect your hearing and what a lot of people don’t know is that ear plugs are actually higher rated in protection in almost every case then the earmuff.

All you have to do is go to your local gun shop or sporting goods store and take a look at the protection ratings, you’re looking for the NRR – Noise Reduction Ratings.

Certainly you can find earmuffs that are rated higher than some other ear plugs, but in almost every case that I can think at every gun shop and every sporting goods store I’d been to even hardware stores, places where they sell hearing protection for working with power tools and things like that, you’re going to see that the noise reduction ratings are going to be higher on these ear plugs than they are on the muffs.

The earplugs! Any recommendation?

Speaking of which, I recommend the HEAROS (NRR33) ear plugs. It works and it’s been working that way for a long time. So they are awesome, HEAROS are definitely my most favorite foam plugs that I’ve used and I’ve used a lot in shooting.

Make sure to buy the blue ones, because they’re big and fat and they will really expand. It is useable and I would say probably about 10 Waring’s and then your earwax will get out ahaha .

Hopefully you keep your ears clean. I try to, but you know, its still there and when they stop expanding into the earcanal then it’s time to replace them.

One thing I don’t have and I wish I did is a custom molded ear plugs you can get from an audiologist. They’re going to cost about 75 bucks a pair.

They’re going to mold the silicone to your ear and that really blocks out the sound. Now if you run those in conjunction with some high quality hearing protectors, I think you’re going to be covered.

We do have a cheaper options, which is the Decibullz Custom Molded Earplugs (NRR31). The price at this moment at amazon.com is 25.99 bucks. 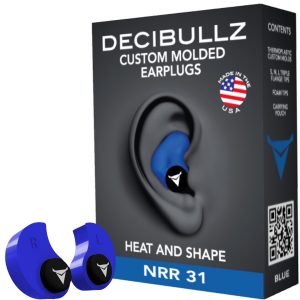 If you’re looking for the most protection, ear plugs are the way to go, but also you can double them up. So sometimes, I shot with these earmuffs together with foam plugs.

What I’ll do is I’ll spin a pair of the ear plugs into my ears and then I’ll put the earmuffs over them. I can still hear people talking in case you’re wondering. But if I really need to talk for a long period of time I’ll just swivel the ear protectors up, leave the foam in.

But it’s important to understand that you’re not really doubling the protection. Of course your gonna be more protected but you want literally taking the exponential number of the noise reduction rating and doubling it.

What I mean by an exponential numbers is that when you go up from 28 NRR for example to 32 NRR, you’re not just adding four points, you’re actually adding in exponential increase.

In fact when you go from 32 NRR to 33 NRR, you may not think that that’s a very big difference but in fact is very significant. Even a change in one number is significant and that’s why the difference between typical earplugs that rated liked 32 rating are going to be much much better than a 26.

Theres also a package that includes plugs and muff as well as eye protection all together in 1 box and the NRR ranging from 27 to 31.

This review is for the sake of anyone who thinking of combining both, the ear plugs and earmuffs.

If you combine the ear plugs with the electronic ear muffs, if you are hard of hearing for example in windy and noisy day or you have a large group of people that you are trying to communicate with, that may be the best bet for both protection and hearing.

The ear cup is not that deep, the cushions are deforming when they’re being stowed so it’s not sealing that well and the batteries are always wearing out.

Like, I don’t have enough things to worry about out there in the desert or the woods, wherever I’m testing and if you don’t know what I mean it goes something like this ;

So if I can eliminate one set of batteries then I’m happy.

Actually the Peltor Tactical Sport are okay, I mean they’re not awful. You can integrate, you know plugins the PAL. They are okay, I just don’t wear them anymore and that’s really what we’re talking about, what do I currently use.

Every day we put our hearing under stress, so i’m always looking into different hearing protections. This Ultimate 10 by Peltor is a good hearing protector. I like it, they’re super lightweight. they have a relatively deep ear cup. The seal on them is pretty good.

Vantage of being kind of profiled so you can run a scoped rifle better without the ear cup coming off. But they kind of have that same problem.

I still like them. These are good, they’re not great because they don’t have a deep ear cup. The ear foam on them is not that excellent and so they really don’t block out a ton of noise.

Now if you’re using the ear plugs foam with these as I’ve always done, more doable. They do have an audio jack in them and they do take a very common battery and yes they still burn out at the least opportune times.

They’re still good although I haven’t shot with them for the past three years. The reason is that it wasn’t providing the best hearing protection. I mean, if you shot alot and may suffering from hearing damage then i would suggest you to just trying to preserve what you have left.

For a better hearing protector than the Peltor Ultimate 10, this is what I found, yeah the ClearArmor. There is no actual name for this earmuffs, whatever they are I’ll put the link here.

I took it apart to find out why it’s pretty excellent compared to the peltor. First up I look at the thickness of the plastic. I don’t have a peltor taken apart and I’m not going to but obviously  it’s thinner than the ClearArmor.

Then it has several different foam types. It has a dense foam at the apex of the ear cup and it’s really pack with foam and you can put some more in there if you wanted to but the thickness of the outer shell plastic is pivotal.

Then it has a screw in ear cup. All the other ones I’ve mention before have snap in ear cups. The most important part to highlight about the ClearArmor earmuffs is the gel pad.

In aviation headsets, this is where a lot of money is spent. Aviation headsets like David Clark’s have a gel pad, those are nice. But sometimes they don’t seal that good especially in cold weather. That gel gets really cold and it’s not flowing.

Some people would say that peltor Ultimate 10 had a more comfortable headband and i choose to agree with that becaus I’ve never found the headband of the peltor to be uncomfortable. In fact, I like how sometimes it can ride under hat. For the ClearArmor, you’re going to have hard time doing that because It’s designed to be over the head.

Anyhow, it is comfortable and have better clamping pressure and the attenuation is 34 decibels, totally worth it.

ClearArmor earmuffs had a really good ratings in Amazon. They do fold for storage and when you do it doesn’t destroy the ear cups like some of the others we’ve talked about.

For my money i definitely go with the earplugs, yes it is a little bit harder to take it in and out and little bit more time effort and energy but they’re definitely going to protect your hearing at a higher level than the muffs on a live fire shooting range.

But, for double protection and most important that it is still cheap, then here’s my current system, combining the ClearArmor hearing protectors and the HEAROS ear plugs. 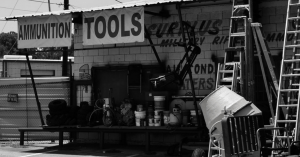 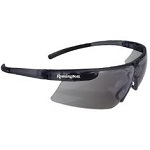 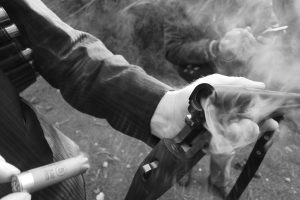 www.claypigeonthrower.org is a participant in the Amazon Services LLC Associates Program, an affiliate advertising program designed to provide a way for websites to earn advertising revenues by advertising and linking to [Amazon.com or .ca, .co.uk, etc.]